Buy, Sell, Restore! Gum Machines, Trade Stimulators, Novelty and Arcade Machines, and late-model Pinball Machines. Just about any Coin-Op you can think of!

Looking For A Special Item?

I know many dealers & collectors, and can find exactly what you are looking for. Advertising, Toys, Coin-Op, Clocks, Thermometers.  RAY (502) 291-1699

Check my eBay Feedback. If you have any questions/concerns about an item purchased from me, please call or eMail within 7 days, ... I'll make it right! 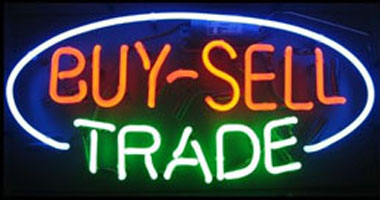 Want to Sell Your Item?

CLICK HERE to email me with photos of your item. Include your tel.# and asking price.

I will evaluate the condition of your item, and call you, or email and make an offer.

When we make a deal, I can pay you via Paypal or Check.

Once you are happy the funds have cleared, you mail me the item.

NOTE: You don't mail anything until you get paid, It's safe, secure and easy. I complete hundreds of deals like this every year!

Pin ups 'In The News' 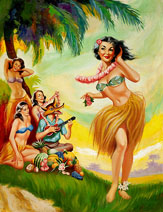 This large scale, colorful cheesecake pin up painting features a Hawaiian hula girl serenaded by Rogue Magazine's signature wolf and was created as cover art by Lloyd Rognan for an unidentified issue of the infamous early men's magazine. This exceptional pin up is now being offered for sale from my personal collection. Contact Treasureray today for more information!

Collectibles In The News!

DAIRY QUEEN is HOT, and prices are rising fast. If it was made in the 50's or 60's and in above average to mint condition, DAIRY QUEEN advertising is a must have.

I started collecting Rat Fink gumball machine charms in the 1960s when I was 12 yrs old, spending every nickel of my allowance to acquire every color. In the mid 70s I collected Coca Cola signs, soda pop trays and toys, vintage pinup art and calendars, coin operated machines, and advertising thermometers.I went on to collect light up signs, store displays, clocks made by Pam Clock Co, Dualite, Neon Products and Double Bubble Clocks.

One of my favorite clocks that I have for sale is the Coca Cola Pam Clock. I then began restoring Coca Cola machines, Pinball and Arcade Machines, Jukeboxes, Peanut Machines, Trade Stimulators and most anything coin operated. My favorite signs that I'm selling are the Ed Roth Rat Fink Sign and the Coca Cola 12" Button Sign.

Over the years I have bought and sold many different items that have caught my eye, or what looked interesting to me or unique! Today I buy from many different collectors, dealers, trade shows, auctions, flea markets and antique malls.

I've also been partnered with my brother Allen at treasure-cove.net in sales, service, and restorations of Pinball Machines. In our 15 years together, we've restored many games back to their original pristine condition or better by clearcoating playfields, and replacing scratched or worn cabinet artwork.
We are well-known and highly respected, and have restored machines for customers in Australia, New Zealand, Hong Kong, Germany, France, England, Monaco, Dubai, Canada and the USA! Some of our favorite games are Medieval Madness, Monster Bash, Indiana Jones, and Twilight Zone.

An achievement we're so proud of: 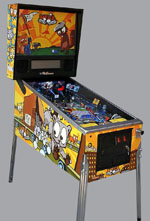 Back in 2006,  we were invited, and partnered with, the Byron Nelson Golf Classic and EDS Systems, to build 5 completely new and unique pinball machines, that were to be auctioned off on ebay, with all proceeds going to Childrens Charities.
Only 5 total games were made, and each were to be signed by all of the pro-golfers that participated in the tournament.
It took us over a year to make/transforn the games into MEGA GOLF BALL FRENZY! and believe me, no expense was spared to make these games the absolute best anyone has ever seen.


During the tournament, the 1st game was auctioned on ebay, and brought a world record $15,600 for a pinball machine! We were so proud of the monies that went to charity because of our hard work.

In the following years, EDS and Bryon Nelson partnered with other companies, .. even OCC and American Chopper,... but none were ever able to even come close to what we did with Mega Golf Ball Frenzy back in 2006!

If you see something interesting at Treasureray or want to ask more questions, please feel free to do so. I also buy so give me a call 502-291-1699 and we can talk. Thanks for Looking!!    by Ray -  Google+

Be sure to visit my affiliate site ... TreasureCove Pinball   -  Restoration, Sales, & Service